These four paintings were completed in January and February 2016. They honour three great artists: JS Bach, Beethoven, and TS Eliot. My thoughts about each painting are given below the last quartet. 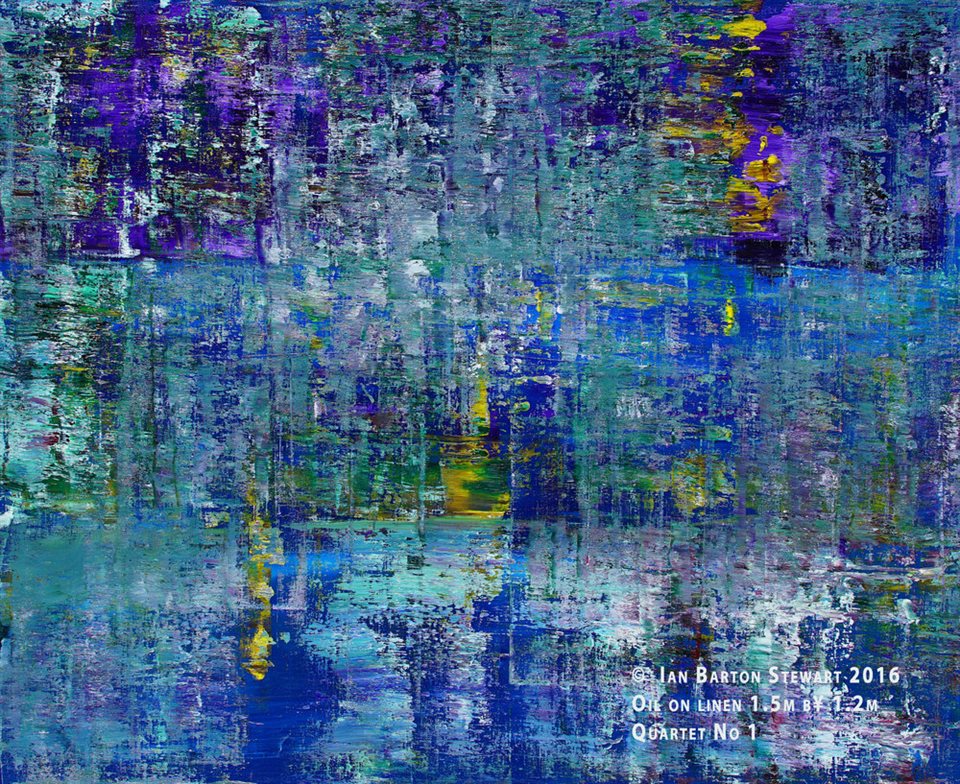 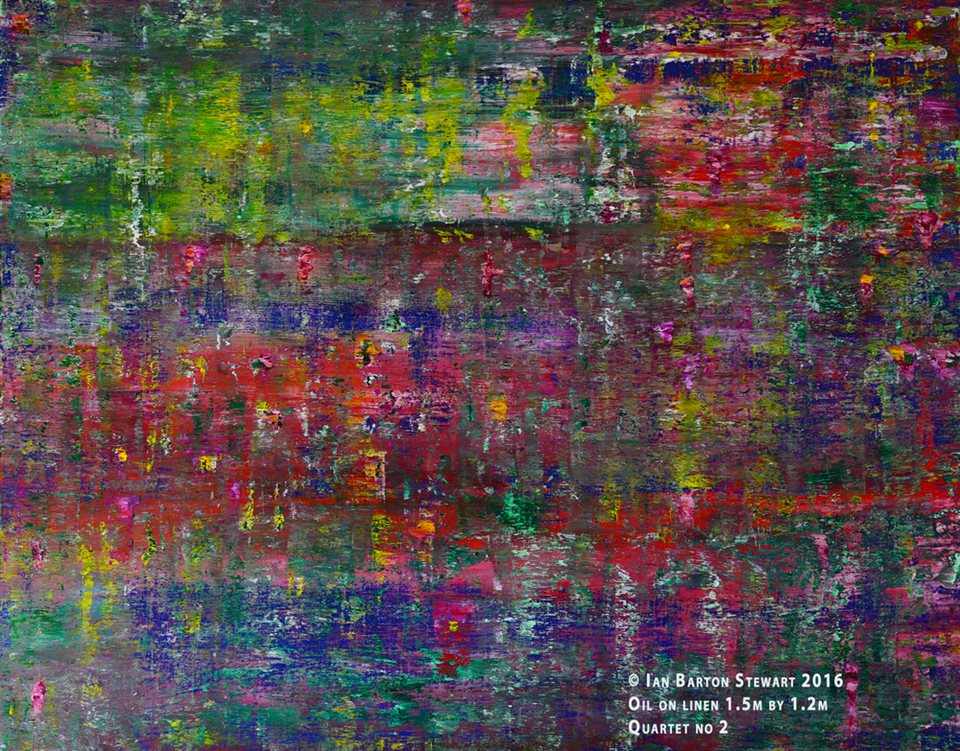 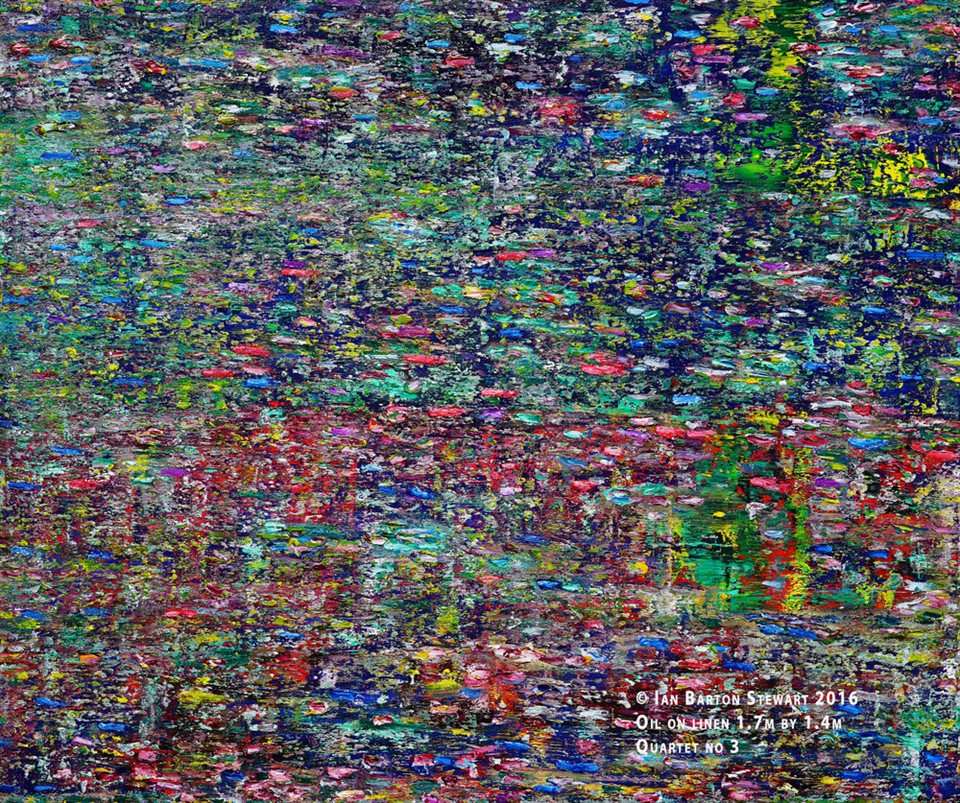 The Voice of the Hidden Waterfall

Quartet  No 4 by Ian Barton Stewart

Like JS Bach's masterpiece, the Goldberg Variations, this work displays a striking abstract complexity and objectivity, compressing the several movements of a quartet form into a single pictorial space. JS Bach's music has a wonderful detachment to it. I don't mean that Bach's music is like mathematics. But rather that we gain little sense from any of his music what Bach the man was like, what he thought. We know that he composed for the greater glory of God. But aside from his music, and biographical details we never really get a sense of the man.

Like all the quartets, this painting is inspired by music, although the fourth quartet is also inspired by poetry.

Some painters in the early twentieth century produced paintings that sought to depict music, but I do not find they succeed in this endeavour - however good they may be as paintings. This opening quartet penetrates more deeply into the core of music and what it conveys to our intellects and emotions, and how it helps us understand the world, and our place in the universe. I say that because I have spent a lot of my time developing my own skills in both art forms, and I feel about this work the same way I feel about some of the great works of music. Writers on synaesthetic theories of visual art sometimes fall into a trap because they lack training to a high level and experience in both art forms.  I cannot but help feel that some of the paintings that attempted to portray music in visual form suffer from the problem that their skill and insight into one art form greatly outstrips their skill and insight into the other.

Scriabin claimed he saw a particular colour as signifying the note E.  Many musicians (myself included) likewise see colours as being associated with certain tones or certain keys in music, but that doesn't tell us very much of use. Scriabin's Black Mass Piano Sonata No 9 for example (which I played for FTCL) is a remarkable work, and succeeds because it is atmospheric, complex, and a great work of music. Whether Scriabin had in mind a particular colour or colours is not relevant to our enjoyment of the work. I played it to a very high standard, but do not associate it with any particular colour. Of course, being nicknamed The Black Mass, it conveys darker tones, but that is hardly a surprise.

If I had to choose a string quartet that was the musical analogue of this painting, it would be Beethoven's quartet in C# Minor op 131, which Beethoven considered to be his greatest work.  I prefer the Bb quartet op 130, but everyone has his favourite. The late quartets are very abstract forms  of music, which aside from programatic music, lends itself to abstraction as an art form. Beethoven did not just pen any of his great works in a few hours (a problem for the unwary with notation software is that it is too easy to write notes without thinking about what one is writing), but strove to produce great works of art. That is the way great art is made. Sometimes it can be an improvisation, but never will someone unskilled in his art form produce a masterpiece. To have anything worthwhile to say in either art form takes many years. In part this reflects the time required to become a master of the chosen medium. But painting like music is greater than the mere technical aspects.

The great artists find their own path rather than imitating anyone else. Some, like Schubert, could compose masterpieces very quickly; and a few painters could finish a masterpiece in a day (Franz Hals, Cy Twombly for example). None of them produced art every day or even every week. Only when inspiration moved the great artists did they paint or compose great works. Vermeer painted 36 or so paintings in his lifetime. Of these four stand out (The Art of Painting, The Concert, The Music Lesson, Girl With a Pearl Earring), and then there are a range of paintings beneath them in quality. By the way, my novel, Love And The Art of Painting (see link at top right), says much about Vermeer. Even prolific painters rarely painted more than a hundred major works in their lifetimes. Beethoven laboured away on his compositions, because it was not just a case of choosing the right notes to make music, but a struggle to express what he wanted to say in his compositions, and a search for perfection was a strong motivation.

Chopin (1810-1849), consummate improviser and master of the piano that he was, composed relatively few works in his entire lifetime - with the op 72 E Minor nocturne for example, we are already into his posthumously published works. And yet, the world would be far the poorer had these four slim volumes of piano works never been composed. He wrote that he could not compose in winter, and some years he composed very little at all. One could go so far to say that had he just composed either of the piano sonatas op 35 or 58, he would have been regarded as a great composer.

To take another example, Mark Rothko produced many paintings of no evident artistic conviction or skill before the 1950s. Much of his output from the 1950s to his death is, if a little repetitive, outstanding. The best of his works are the set of paintings originally commissioned for the Seagram restaurant in New York. Rothko rightly considered they were too sombre for a restaurant and withdrew from the commission. Today, we are all fortunate that these outstanding works in the history of art are housed in the Tate Modern in London.

This is the most lyrical of my Four Quartets. The strokes of blue, yellow, magenta and helios red were the final stages of the work, which went through several stages over many weeks, actually commencing with a grey ground, and then a phthalo blue layer on top, before any other colours were added. I did not choose the final colours consciously as such; I had an intuition that they were the colours I desired to finish the painting. The painting evolved over the space of several weeks. For me, painting is a little like playing a musical instrument: first the technique must be learned, but once it is assimilated, one does not even think about it, unless the work presents a technical difficulty that requires much work. If one is a slave to technique, the result will be uninspired and formulaic, and another example of bad art. So, the great artists of course must have great technique - someone illiterate cannot be expected to write a novel. But ultimately their artistic vision and judgment distinguishes them from the numerous run of the mill artists. In art as in life if we stop searching for ways to improve we go downhill.

So, how did I know this painting was finished? I knew the painting was finished because there was nothing I wished to change! In that sense, as explained in a narrative context in my novel, Love And The Art of Painting, a painting speaks to the artist. Art is sometimes a struggle between the artist and the painting. To me, a painting remains an adventure, always informed by my training and experience in art, painting, and music. So, when the painting does not succeed, I either leave it and come back later to it, or I break through whatever obstacle it presented to me. Sometimes I leave a work for months. It is a similar process with music. I have played the most challenging works written for keyboard including JS Bach's Goldberg Variations, Beethoven's Appassionata, Waldstein and three last piano sonatas, Chopin's two mature piano sonatas, Liszt's B Minor sonata (check out my recording of this and Chopin's B Minor Sonata on Amazon and CD Baby), and Rachmaninoff's second piano sonata. Such works present the pianist with huge technical and interpretative challenges. But you miss the point, whether you are the performer or the listener, if all you focus on are the technical difficulties. If the listener is not moved by the performance, either the music is bad or the performer is bad, no matter how technically proficient. The great works of art in painting, music and poetry are adventures. They are works with the power to transport the player, listener or reader to other worlds. In poetry, Keats' words "charmed magic casements opening on the foam of perilous seas in faery lands forlorn..." and his questioning whether he wakes or sleeps is very apt as a description of how we feel when moved by a great work of art, and how an artist feels when a work succeeds...

This work was inspired by TS Eliot's profound poem Little Gidding. There is a passage in that poem that refers to the voice of the hidden waterfall, not seen because not looked for, and references to humanity's continuing need to explore. This poem rivals the greatest poems of Keats, Rilke, Goethe, Milton and other great poets. So, I am proud to have been inspired by this poem in this work.

Some of the things I like about this painting are the sense of falling water, the purple colours that hover above this but partly obscure the waterfall, the dark inky pictorial spaces in the top left quadrant that remind me of Japanese masters, and the sense of movement that is very evident in the video of the Four Quartets. And yet... this is a single, unified composition. That is part of the richness of this work.

THE VIDEO OF FOUR QUARTETS

And lastly on this page, you will find my video of the Four Quartets, accompanied by the Aria from JS Bach's Goldberg Variations. I learned the Goldberg Variations with my much esteemed piano teacher, Mack Jost, soon after becoming a Fellow of Trinity College London in piano. And I recorded them in 2000. But I may release a new recording of them this year. Some people maintain a rigid view that the Goldbergs are transcriptions when played on the piano. One might just as well say that all Bach's keyboard music is a transcription when played on piano. That is of no consequence even if correct (Bach wrote for the keyboard - not for the clavichord, harpsichord or organ, save where he expressly stated), for Bach's music speaks to us today because it is some of the greatest and most profound music ever written for keyboard. Personally, I prefer to hear Bach played on the piano, just as I prefer to play and listen to Chopin and Liszt on a modern Steinway or equivalent grand piano rather than a piano from Chopin's time. Why? Because the modern instrument is far more sonorous and offers more by way of expressive possibilities. And I strongly believe that Bach and Chopin would have preferred the sound of a good modern piano, had they been invented then.